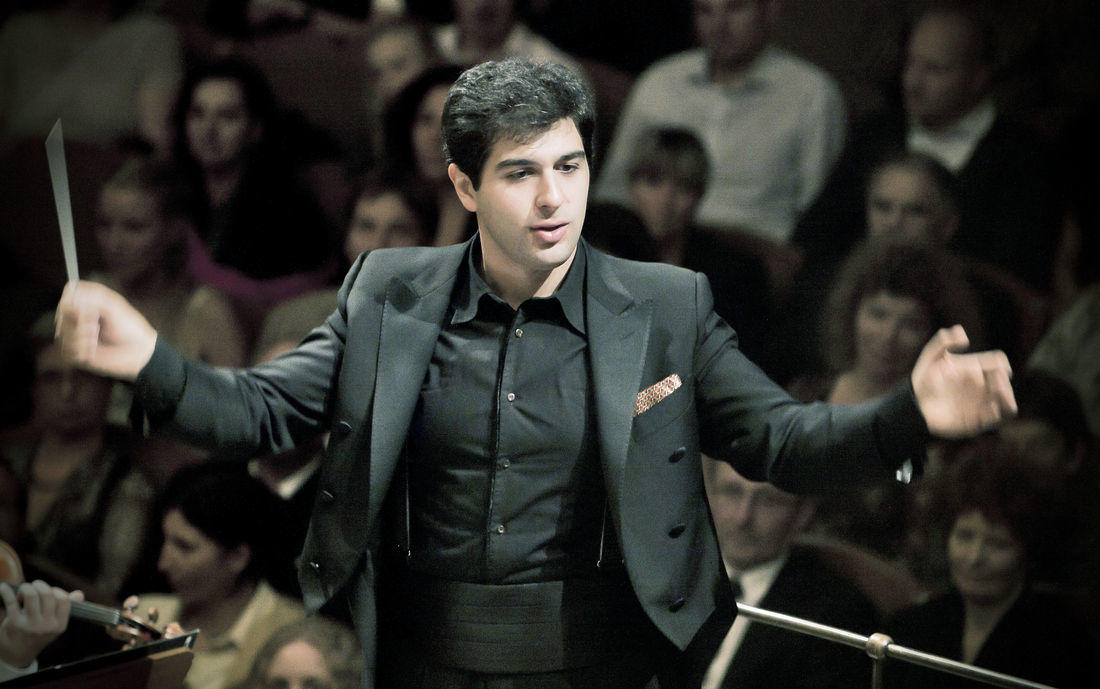 “The conductor led the orchestra with an uncommon attention to detail, skillfully guiding the musicians through the whole performance. His hands were clear and precise; this was a performance of great dignity and nobility. A highly successful and passionate performance!”
— Hessisch Niedersächsische Allgemeine

Formation: Driven by an unwavering belief in the power of music to heal, unite, and inspire, Sergey Smbatyan is one of the most gifted conductors of our days. From great concert halls to classrooms, Smbatyan’s remarkable career of musical achievements and successful enhancement of young people’s access to the arts in Armenia and around the world, demonstrates music’s extraordinary capacity to transform lives.

Sergey Smbatyan was born in Yerevan in 1987, in a family of musicians. A lifelong advocate for music education and social development through art, Sergey himself was shaped by his childhood experience taking violin lessons first with his Grandmother Tatiana Hayrapetyan, and later with renowned violinists Bagrat Vardanyan and Zakhar Bron. He started his early musical career as a violinist by participating in numerous national and international competitions not only in Armenia but also in Italy, Japan, and Romania. He performed with both the Moscow and Israel Philharmonic Orchestras as a soloist. As a conductor, Sergey was significantly influenced by the late Sir Colin Davis, Riccardo Muti, as well as Valery Gergiev.

Career highlights: In 2005, as an 18-year-old musician who was committed to conveying every dimension of his belief in music, Smbatyan founded the State Youth Orchestra of Armenia- the current Armenian State Symphony Orchestra (ASSO). Under his leadership the ASSO became one of the leading orchestras in Armenia and beyond its borders, admired for its unmatched commitment to new music, diversity and inclusion, and the development of groundbreaking digital initiatives. ASSO received invitations to internationally renowned festivals and major venues such as MIDEM in Cannes (2015), Ludwig van Beethoven Easter Festival in Poland (2017) and others. In addition, ASSO has had the chance to perform in the cities like Berlin, London, Paris, Vienna, Moscow, Abu Dhabi and in many cities.

Sergey also continues to expand the outreach of his own professional career. One of the most outstanding moments for him as an orchestra conductor was his debut with the London Symphony Orchestra. In 2010 he conducted the joint Gala Concert with the renowned artist Maxim Vengerov for HRH Prince Charles “Princes Trust” event at Windsor Castle. After a great success, the concert was repeated at Buckingham Palace in 2011, where he conducted the
Philharmonia Orchestra once again.

One of the few classical musicians of an Armenian origin to truly reach mainstream audiences while maintaining the highest musical integrity, Smbatyan had the chance to perform with the Mariinsky Theatre Symphony Orchestra, the Moscow Philharmonic Orchestra, the DSO Berlin, the Dresden Philharmonic, the Warsaw Philharmonic, the Munich Symphony Orchestra, the Sinfonia Varsovia Orchestra, the Korean Chamber Orchestra and with many others. The
collaboration with the Korean Chamber Orchestra continued later in Moscow with the soloist Pinchas Zukerman in Boston, and at Carnegie Hall in New York.
Among the highlights of Smbatyan’s career is his 2018 European tour with the Malta Philharmonic Orchestra (MPO). Sergey and the MPO performed in the Mediterranean Conference Hall, Valletta; Philharmonie Gasteig, Munich; Liederhalle, Beethoven Saal, Stuttgart; Kurhaus, Wiesbaden; Philharmonie, Berlin; Musikverein, Vienna.

Later in the same year, the tour continued to the USA and Russia with the performances at Kimmel Center, Strathmore, Carnegie Hall, Great Hall of Moscow Conservatory and Mariinsky Theatre.

Artistic and humanitarian initiatives: Sergey is one of the most decorated conductors of his generation. He has worked to raise awareness of the importance of music education by founding the unique UNICEF Children Orchestra (2009), which gave numerous performances throughout Armenia and Europe. The most successful initiative in this type is “DASA” Classical Music Educational Project, launched in 2018. The project involves high school students by offering them a hands-on experience in exploring classic music.

Sergey always seeks active participation in charity projects through spreading music at nursing homes, orphanages and universities throughout Armenia. The continuous artistic support to Aurora Humanitarian Initiative has been another large-scale humanitarian activity in his career.

Other impressive initiatives are the foundation of 24/04 World Orchestra for Peace in 2015 (a unique "24/04" World Orchestra, comprised of 123 musicians from 43 countries who were united for one day and for one purpose - to preach unity through music), and the Pan-Armenian Symphony Orchestra in 2017. The latter, under the lead of Smbatyan, had its debut at the 40th anniversary of Gramophone Awards in London.

As a sign of his advocacy for the proliferation of the arts in 2016, Sergey Smbatyan joined the renowned actor John Malkovich in launching a new innovative project - the fusion of music and
literature. In September 2016, he conducted the launching concert of All Armenian Choir and Orchestra "Generation of Independence” where 1144 Armenian musicians from different regions  of Armenia and Artsakh performed together on one stage. This special project was organized and led by Sergey personally.

Honors and Prizes: Smbatyan has received numerous distinctions. In May 2016, he won the first prize of the new International Concert Competition "Debut Berlin". The laureate concert took place on June 1st at the Chamber Music Hall of the Berlin Philharmonic Hall.

Sergey is the youngest art worker (awarded at the age of 27) and the first Armenian to be awarded the highest award of the Government of France in the field of art: the title of Chevalier of the “Order of Arts and Letters”, granted by the Minister of Culture and Communication of France.

In recognition of his extraordinary service to music, his activities in music education and contributions to the musical community, all of which are important aspects of his work in Armenia and abroad, Sergey was awarded with the title of “Honored Artist of the Republic of Armenia” by the President of the Republic of Armenia in 2016, as well as presented with a Gold Medal by the Mayor of Yerevan in 2017.